I don’t use much social media. I haven’t had a Facebook page in about six years, I never signed up for Instagram, I find Pinterest to be a scourge and a menace to the modern web, and sadly my original Myspace page is lost to time.

The one “timeline”-style social media site I use regularly is Twitter. I’ve been on there for about a decade and I generally scroll the timeline daily, while posting a few times a week. The problem, as you may have heard, is that often, reading the timeline can be a major bummer. I’ve done a good job recently of cleaning up the list of accounts I follow to make my timeline a much more pleasant experience, but it’s still impossible to avoid entirely. Especially as Twitter does experiments to move the order of timelines around, show me tweets and categories from things I haven’t explicitly followed, and when the people I follow retweet something I’m not a huge fan of.

Last month I fulfilled a lifelong dream of visiting Japan. It was wonderful. Before my trip, however, I figured that I wanted to disconnect a bit from my normal internet habits, which meant not reading Twitter for the whole two weeks of the vacation. That would be easy enough to do by itself, but I still wanted to be able to post. Sharing pictures, observations about Japan, stupid wordplay that came to me after a couple of drinks in Golden Gai, and so on. Generally, though, with the Twitter app you are immediately exposed to the timeline before you can post yourself, so it would be difficult to have one without the other.

I had built a number of Twitter bots and applications before, so the API was very familiar to me. I use Telegram to speak to my friends already, and as a messaging app the UI is already very close to what you would need to Tweet: write text quickly, and maybe attach an image. For hosting, I chose Heroku, both because for a use case like this it’s 100% free, and because I’m familiar with it from using it to host all of my Twitter bots.

The workflow: I send a message to my Telegram bot. Every 10 minutes the Heroku script runs and collects every message to the Telegram bot since the last time the script ran. It then sends the text and/or images to Twitter via the Twitter API.

Here’s what the UI looks like within Telegram. I simply send a message and once it has successfully been posted, I receive a response, which in this case is just a random string filled with emojis. 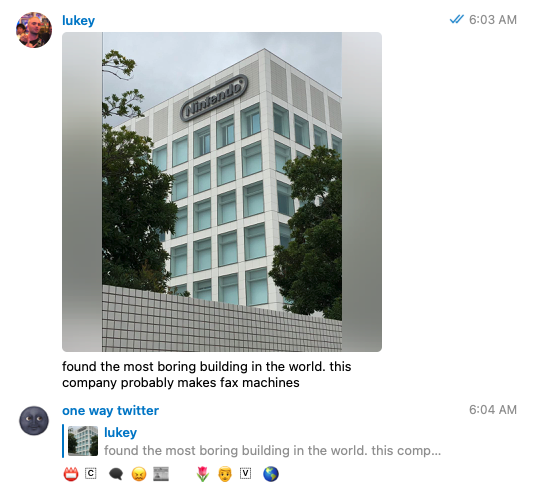 It worked. I was able to post for the duration for my trip, keeping my friends and e-friends up to date with my holiday, without having to read the timeline once. I also think that, moving forward, I’ll continue to use this UI instead of the full APP when I want to tweet, as I find it faster to simply get my thought down and send it. Sometimes you want to post without having to read, you know?

Here’s a picture of me next to the statue of Hachikō in the Shibuya district of Tokyo. This statue, memorializing one of the greatest dogs of all time, is a popular meeting place for those visiting Shibuya or Shibuya Crossing. 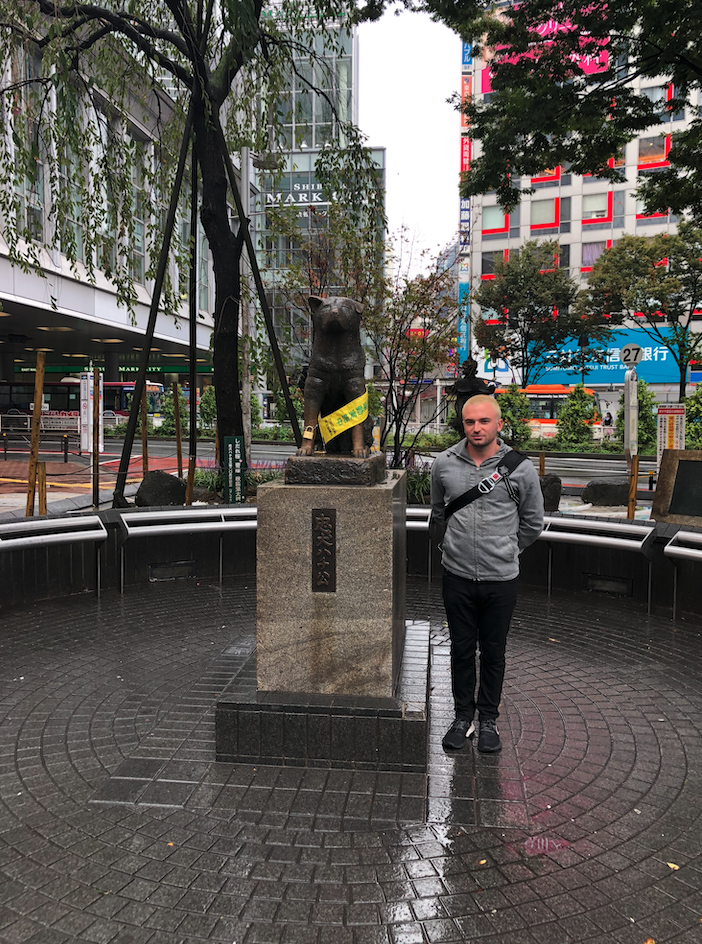